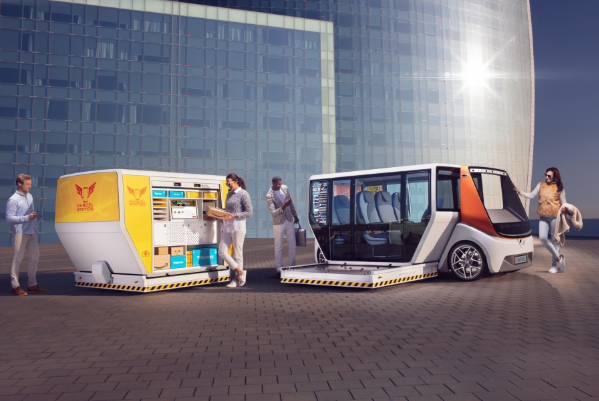 MetroSnap, a universal city electric car was premiered at Consumer Electronics Show CES-2020 in Las-Vegas. The multifunctional prototype of the modular vehicle is created with the use of Stratasys 3D printers.

The company Rinspeed is sure that the future belongs to modular vehicle systems. The Swiss enterprise, established in 1977, basically restores, tunes and designs concept-cars. The new company’s invention Rinspeed continues the company’s developments line that was already demonstrated in 2018 and 2019. It is an electric car with easily replaceable body modules that let the vehicle perform any transport function – from public conveyance to mobile stalls and post service.

The engineering designers came up with the idea of idle time reduction and recoupment rise. They decided to level up the containerized cargo transportation. Electric cars have to be charged anyway, but each delivery needs certain time for loading-unloading operations. So why not to unite these processes and make the chassis stay on the road? As a result, the batteries are split up between the chassis and the vehicle body. You can quickly change the cargo section and send the car back to the route. If there is nothing to change, then the unloaded chassis have enough charge to go to the base or to the next client and get a new portion of juice along with cargo.

Ideally, the process should remind a pit stop during the races. The car is able to change the modules by itself, unloading onto special platforms with power supply for charging the built-in batteries. For example, the car can bring parcels or a vending machine with fast food to a settlement or an office center. The local residents can take their sandwiches or parcels from this car protected from bad weather. A payment terminal, a biometric recognition system and many other gadgets can be built into the module. These processes are being developed by many project partners. Meanwhile the chassis are on their way back to the kitchen to bring the next portion of sandwiches, or carrying new parcels to the sorting centre.

Of course, we should first of all be interested in the fact that the presented prototype uses a lot of polymer components that are created on Stratasys 3D printers with the use of fused deposition modeling (FDM) and photopolymer jetting (PolyJet). There are about thirty 3D printed details in the given concept car, including inside trim panels, display encasings, bodies electrical receptacles, ventilation and vehicle registration plate holdings. The use of additive technologies is the key to the unlimited customization.

Want to try and print some parts for your new project but don’t know, which 3D printer to choose? Check out 3D printers with a large build volume. Large-format 3D printers are capable of creating really big prints in just one go. Nowadays, many enterprises are thinking of acquiring such a machine, and even 3D printing enthusiasts are setting their sights on printers with a larger build volume. BigRep is not the only big player on the market of large-format 3D printers. One of the most prominent and popular models is Modix 120X. With its build volume of  1.200 x 610 x 610 mm, Modix 120X is capable of printing huge parts, which will be of great profit to enterprises and satisfy the most dedicated enthusiast.