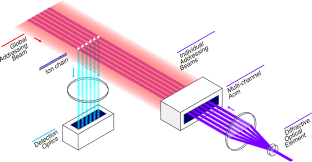 The device that you are using all your life is now identified as a classical computer. With improvements in digitalization and advanced technological development, quantum computing is rapidly flourishing and expanding its usage in different industries.

Quantum computers arrange their data in a complex set of memories determined as qubits, i.e., quantum bits. To understand the intake and production of qubits data, you have to know about the stacking of quantum hardware.

The architectural layering of quantum hardware requires the consequent functioning of the following abstract layers. These are the Quantum plane, Control & measurement plane, Control processor plane, and the Host processor. Hence, that is what we will discuss here in the later parts.

The heart or core of a Quantum Computer is the Quantum Data Plane. The hardware layer holds the Quantum computer in place, including its architectural structures and physical qubits. It represents the primary aspects of the physical quantum system within the computer.

Since it includes the physical qubits, they are in the form of quantum dots, superconducting circuits, trapped ions, color centers, and many more. In the Quantum Data Plane, the state of qubits is measured and manipulated by the supplemental circuitry. That enables the qubits to perform functions and operations within the data plane.

You can define the fundamental properties of the quantum data plane via the error rate of two-qubit and single-qubit gates, qubit coherence times, number of qubits, and interqubit connectivity within a single module.

As the name suggests, the control and measurement plane converts the analog qubit measurements into bits. As the data and signals transform to classical bits, it becomes easier for the control processor to handle them. This hardware layer has to maintain the shield by producing extreme cooling to isolate the qubits from the external environment.

The fundamental function of the Control Processor Plane is determining and triggering the sequence of quantum gate operations and measurements. These operations are carried out on the Quantum Data Plane by the Control and Measurement Plane. If the quantum computer is error corrected, it is the task of the control processor place to operate the quantum error correction algorithm.

When the control processor plane runs the error correction algorithm, the time is taken for processing often slows down the quantum computer’s speed. As a measure of this issue, this hardware later consists of several interconnected processing components to adequately handle the computation load of error correction.

Based on different tasks of the control processor plane, it can be categorized into two parts. One is the classical processor to run the quantum program. Another part is the scalable custom hardware for direct interface and scale high-level instructions.

Nonetheless, with further research on the implementations of quantum architectural hardware, specialists can achieve the probabilities of quantum computers.