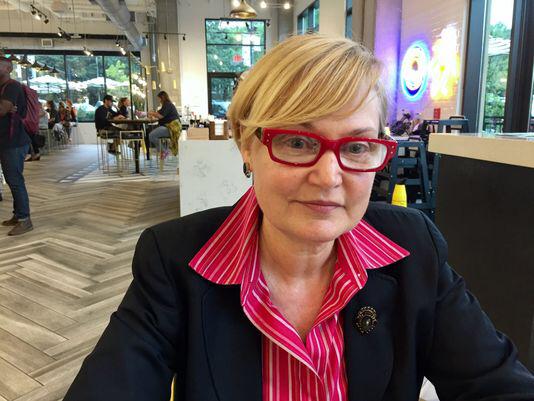 Kelly Oliver is a well-known force in the literary world, with her oh so thrilling books have roared on to the bestseller list time after time me, and her new book “High Treason at the Grand Hotel: A Fiona Figg Mystery” is set to do the same. Oliver is an epic writer and storyteller, creating stories that whisk readers into another world, keeping them enthralled from the first page to the last page.

“High Treason at the Grand Hotel: A Fiona Figg Mystery” is book two in this series, following the exploits of file clerk turned secret agent Fiona Figg, who goes undercover, and gets herself into a bit of trouble along the way. This book is full of intrigue, mystery and good times, and is one you definitely want to add to your winter reading list sooner than later. We caught up with Oliver to learn more about her, this book and what’s coming next from this epic author.

In High Treason at the Grand Hotel: A Fiona Figg Mystery, Fiona Figg, your protagonist, is a woman in a men’s world. How does she handle this in her life as a spy? As an author what was it like for you to bring this to life?

Sent by the War Office to follow the notorious Black Panther, file clerk turned secret agent Fiona Figg is under strict orders not to get too close and not to wear any of her usual “get-ups.”  But what self-respecting British spy can resist a good disguise?  Within hours of her arrival in Paris, Fiona is up to her fake eyebrows in missing maids, jewel thieves, double agents, and high treason.

It’s not just that Fiona enjoys dressing up. She knows there are places women aren’t allowed to go… places she needs to go to fulfill her mission. What else can she do? She dresses up as a bellboy, or a doctor, or a soldier… whatever the assignment requires.

Of course, Fiona’s disguises led to awkward situations and lots of laughs as, armed with only her fake mustaches and her wits, she navigates war torn London and Paris.

I love writing Fiona. She’s so funny and fun. She goes from shrewd cultural critic to mad-capped adventurer. In spite of her middle-class upbringing, and restrained British manners, she moves with the force of a tornado.

In this book, Fiona goes to Paris. Have you been to Paris, or did you write this all from your imagination? What is your favorite spot in Paris to have Fiona work her spy magic?

Yes. I have been to Paris many times. I spent a summer there learning French when I was in graduate school. In my other life as a philosophy professor, one of my specializations is French philosophy.

But, I have never been to Paris in 1917. There, I had to do a lot of research and use my imagination. Many of the characters in the book are based on real-life people, including Mata Hari and Fredrick Duquesne, my villain.

The historical research was fun. I learned a lot of interesting tidbits about French history and who was on the scene in Paris in 1917. A lot of famous American writers hung out in Paris during the war—Hemingway, Fitzgerald, e.e. Cummings, Dashiell Hammett, and Walt Disney. Many of them drove ambulances and volunteered with the war efforts. A few of them show up in High Treason at the Grand Hotel.

Fiona’s undercover work in the prisons of Paris was important to me. In addition to her humorous antics, the reader gets a sense of the dismal conditions for prisoners.

When you did the final read-through of “Grand Hotel: A Fiona Figg Mystery” what was your favorite aspect or scene – and why?

For whatever reason, writing dialogue comes easiest to me. There are several scenes with highly charged banter between Fiona and her three male counterparts, Clifford Douglas, Archie Somersby, and of course, Fredrick Fredricks. Developing these different relationships was deeply satisfying. I can’t wait to see what Fiona gets up to in book three, which is set in Vienna.

You have a long history of being a bestselling author, which is a huge accomplishment, do you have any advice for writers just starting out?

Thanks! I turned from writing nonfiction to fiction about six years ago. And I’m proud of how much I’ve accomplished in just a few years.

Of course, writing a novel is hard work. It takes dedication and patience (which I must admit is not one my virtues). The most important thing I’ve learned writing fiction is that you can change an entire world with just one sentence or phrase. It’s like a miracle.

Ha! That would be fantastic. Of course, I would love to see Fiona on the big screen. Any movie producers out there interested?

I’m always writing. I have three mystery series going now. And I try to write one book a year in each series. I’m thinking of starting a new series based off a new character I just introduced in my Jessica James Mysteries. Her name is Lexington Colt and she’s a federal marshal working for WitSec, witness protection. Don’t be surprised if you see her sporting her own series soon.

And of course, there will be a third book in the Fiona Figg Mystery series. It is set in Vienna and promises more madcap fun.

For more information Kelly Oliver’s books head over to her website.