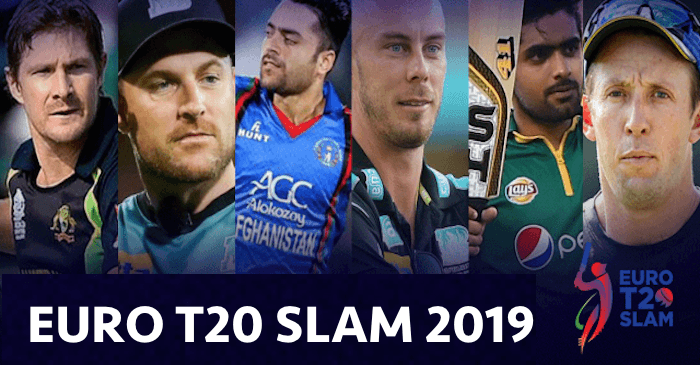 Euro T20 Slam is getting closer and we are about to witness some of the most entertaining cricket of the modern age. The t20 league was announced in March 2019 by the three European cricking nations that are Scotland, Netherlands and Ireland. 33 matches including final will be player between the six Euro T20 Slam teams from 30th August to 22nd September. The Euro T20 Slam Teams, Squad and match venues are now officially confirmed. The draft of the league was held few days back in London that revealed the final squad of each team. Big names from cricket worlds like Shahid Afridi, Eoin Morgan, and Brendon McCullum, Martin Guptill, Babar Azam and many others will entertain cricket fans. Each team has the right to pick one icon and one marquee player for their squad.

Two teams from each county will participate in the Euro T20 Slam. The teams are following.

Each team squad must have

One icon player with a marquee player (pre drafted)

Playing eleven should include 5 overseas players and 6 local players.

Six teams will play total of 33 matches in Euro T20 Slam with 30 league and 3 knockout matches. Each team will play with a single team twice. Each team will play one match on home ground venue and the second one outside. First 10 matches of the league will be played in the Netherlands, next ten in Scotland and the last 13 matches will be played in Ireland. Top 4 teams will quality for the semi finals and remaining two will be eliminated from the tournament. Semi finals will be played on 21 Sep, 2019 in Ireland. The Final of the tournament is scheduled on 22 Sep, 2019 at Malahide Cricket Club, Dublin, Ireland.

These are the Euro T20 Slam teams, squad and match venues. Europe is surely going to experience one of the most entertaining sports events on planet earth. Though this is the first yet energetic wave of cricket but it’s just the beginning of cricket in Europe.