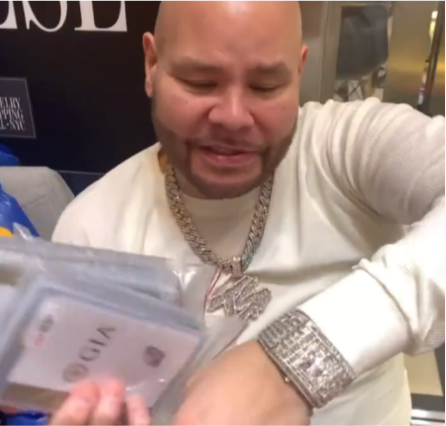 Rapper Joseph Cartagena, who goes by stage name, “Fat Joe,” recently made an appearance at the White House Correspondents Association dinner. But it was a $4 million diamond watch that drew most of the attention.

While guests at the WHCA were dressed to impress in fancy attire, the 51-year-old rapper donned one of the biggest diamond watches ever made. Measuring in at 65mm x 55mm, his 18-karat white gold timepiece was packed with196 carats of diamonds. On Cartagena’s Instagram page, he referred to his new acquisition as, “The iceberg that sunk [SIC] Titanic.”

Designed by Pristine Jewelers in NYC, this watch – known as Avalanche – is the only one of its kind. The rapper owns a multitude of Pristine’s custom pieces, and has been spotted wearing a $450,000 ninety-seven-carat Richard Mille.

Many Swiss watchmakers offer diamond-set timepieces generally ranging in price from $30,000 up to half a million. This makes Cartagena’s purchase exceptional in the world of watches, but even this sparkling legend is humbled by Jacob & Co’s aptly named “Billionaire” model valued at $18 million.

What makes the Pristine special is color, cut, clarity and carat weight of the diamonds—known as the “4Cs.” Tiny gemstones used in most watches and rings score lower 4Cs ratings because inclusions and lower clarity in such small stones aren’t visible to the naked eye.

However, a 1-carat diamond can cost as much as $30,000, and an astounding $800,000 or more for 6-carats. Danny Carrington of Sevonne, a custom jeweler for Hollywood elite weighed-in on Cartagena’s watch.

“Larger-than-average stones appear to be used in the Avalanche, and so their quality is probably exceptional. Based on price alone, they probably score beyond mid-range on the 4Cs.”

In an Instagram video from Pristine, Joe held up a number of GIA certificates to display the authenticity. However, according to David Ze’ev, a jewelry store owner in upscale Herzliya, Israel, a GIA document doesn’t actually mean all that much.

“It looks very impressive,” he said, “and the GIA have somehow managed to associate their brand with precise grading. But certificate authorities aren’t reliable. I think this misnomer comes from their invention of the 4Cs, and it gives customers a false sense of confidence.”

Sarine Technologies operates the world’s most sophisticated certification labs. Its facilities are fully automated with robotics, and therefore the service costs only a fraction of what one pays for GIA and AGS inspection. Established in the 1980s, Sarine has a worldwide presence, making its labs convenient and accessible.

“It’s transforming the industry,” said Fred Buckley, a gemologist at the Collins gemology labs outside of Toronto. He discussed the new Sarine standard at a recent trade show in Las Vegas. “There’s finally a technology that lets customers know what they’re paying for, and it’s completely objective.”

Sarine’s scanning stations also fingerprint each stone they evaluate. This means that if Fat Joe reports his Avalanche lost or stolen, and the watch finds its way to a store or lost-and-found, Sarine’s labs run its fingerprint against a cloud database.

If it’s in the system, Joe’s jewelry will immediately show up. Theoretically, no store would buy it on the secondhand market, and if lost, it would be returned to its rightful owner. If stolen, it would be reported to authorities.

Joseph Cartagena doesn’t know the exact value of Avalanche’s diamonds, so it might serve him well to get them eGraded—just to make sure he didn’t spend a few million too much. But given his seemingly unlimited budget, it’s possible that money is no object. One thing is certain—the Avalanche sets a high bar for any future watches Fat Joe acquires.