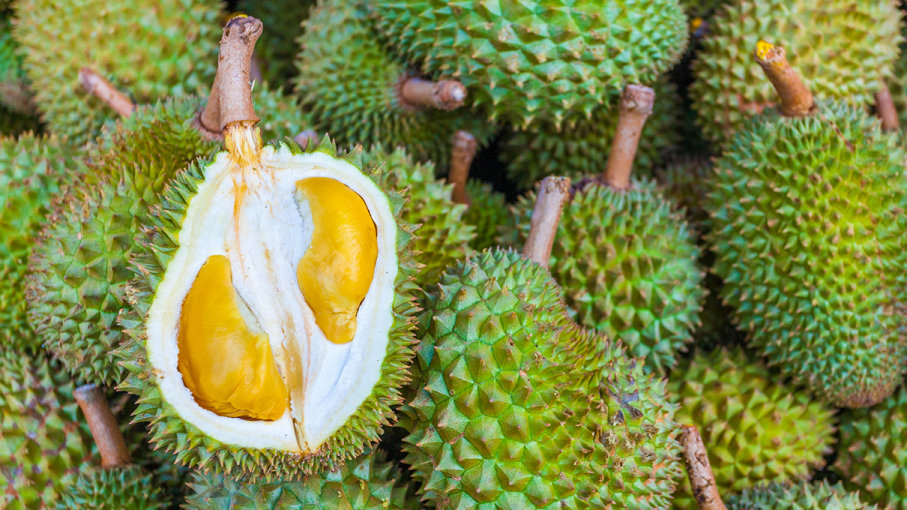 Known to be the smelliest fruit, durian is nevertheless one of the Asian fruits with many virtues for our health. It is recognizable by its hull covered with large thorns. Native to Asia and South America, it grows on large trees and offers us the possibility of tasting it from May to June. Do not rely on its foul smell but rather on its undeniable nutritional advantages and discover how to cook it at home. In Southeast Asia, the durian is named the “king of fruits” thanks to its singularity, so discover it without further ado.

Durian is a fruit that puts off a good number of people because of its stench. It is produced in Southeast Asia and South America, it is an edible exotic fruit that grows on large tropical trees but it is also a fruit that stinks. It has the distinction of having an oval shell of greenish, yellow, or red color depending on its variety, and with thorns. It weighs between 6 to 8 kg and can measure up to 45 cm. Although its shell is thorny, its flesh is white, creamy with a hint of acidity. Its seeds are also edible. The riper the fruit, the stronger or even sickening the smell.

The health and nutrition benefits of durian

Even if the durian musang king has always dragged an unprofitable reputation behind it, it harbors many nutritional qualities for those who wish to hear it. It is considered in Thailand as the king of exotic fruits, used to feed sick people or pregnant women. Durian has undeniable benefits:

However, it should be eaten moderately because it also has high-fat content, unlike most fruits. However, it is recommended for all of these multiple health-related reasons. Also you get the all details about durians from ss2 durian stalls.

How to store durian?

How to cook durian?

Unlike most exotic fruits, durian is an uncooked fruit. It is added during preparations for cakes, mousses, jams, or ice creams.

How to choose the durian well?

Here is a little tip to be sure not to be mistaken: the more the exotic fruit is fragrant and its supple spikes, the more the fruit is ripe. If you want to ripen it at home, just take a less-smelling durian and let it mature.

Durians with cracks are ripe and give off a strong odor if you have to take public transport, it is better that you choose a durian without opening, at the risk of leaving an odor permeated by onions in your car.

Produced in South America and Southeast Asia, durian is an exotic fruit with thorns. There are roughly 30 different species of which barely fifteen are edible.

The jackfruit (jackfruit) is often compared to durian, it is however very different. It is larger and can weigh up to 25 kg even if its appearance and flesh are similar to durian. Unlike its neighbor, the jackfruit is however much less smelly and smelly.

How to cook durian?

As durian is an exotic fruit with thorn, it is important to be very vigilant during its preparation. To open it, simply cover a work surface with newspaper or cloth and then find any cracks on the durian. Once identified, these cracks are used to open the hull with a long, sharp knife. Then, with your hands, you separate and tear the shell of the durian. Once the fruit is cut in half, using a small spoon, the flesh of the fruit can be recovered. That’s it!

Widely used in Asian cuisine, durian allows you to make delicious pastries, mousses, jams, and even ice cream or macaroons.