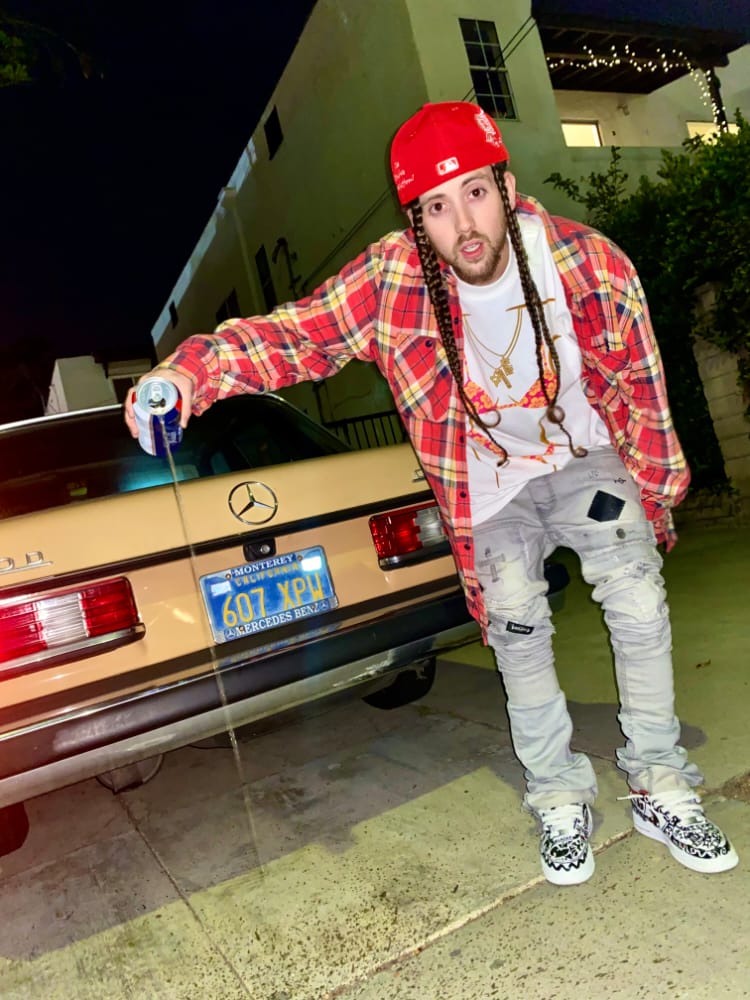 Today we sat down with multifaceted Creator; LorenzoTheGawd, New York Native,
Recording Artist, Fashion Designer, Stylist, Poet, Graphic Designer, and Visual Artist, among
other things who is currently based in Los Angeles. Over the hour-long interview we spoke
about his inspirations, downfalls, and some of the important moments he truly feels shaped his
life and career. This interview is really inspiring because of the wise insight Lorenzo offers at his
surprisingly young age.

According to Lorenzo, both of his parents are extremely creative, and he attributes this to
his artistic and creative abilities. Like many of us, we sometimes inherit the skills, interests,
and/or attitudes of the people who raised us. Sometimes this is for better or for worse, but he
always looks at the bright side of any situation.

“Both of my parents are incredibly creative people, just in their own ways. My father is an
amazing artist. He can paint, draw, write, build, you name it. He makes and does EVERYTHING
himself. My mother on the other hand gets inspired with unique and whimsical ideas and
executes them no matter the obstacle, even if she has to take on a new skill. I feel I have
inherited the best of these from both sides and the combination really feels like I hit the Artistic
Lottery”

From the Songs he writes to the pictures he creates or the clothing he produces; its all truly one
of one. Lorenzo’s love of poetry turned into music when he first realized the relation between the
two as an adolescent. From the age of 12 he has engineered all of his own music and created
all of the art to go along with it.

“I honestly never had access or anyone to do any of that stuff for me. No one really
believed in me or helped me out with getting my music started, but ‘ve never been one to stand
around and wait for help so I’ve just always just done everything myself. The music from writing to
engineering. The art, digital and physical. The clothing from merch to custom pieces, the branding
and marketing. Everything. It gets intricate.”

According to LorenzoTheGawd: Success is easy to obtain but hard to sustain.

“You need to be consistent before all else. Otherwise the world moves on. Like see, the
first project I ever released was in highschool and it was called ‘LI or DIE’ . It had some songs
with my boy Reed Up, but that is long gone. But when i dropped ‘Stuntin’ and ‘Hunnit Band’ with
Peso and them. The Whole school and hood was bumping our songs. I was back and forth
keeping my buzz alive when I left for upstate & started working with Avian and ArchieTheBaker,
But after 2017 cme and i left for CT that little hood clout died out and it was back to square one”

If you are ever feeling lost or don’t know what you want to do with your life, don’t be upset. You
just need to realign with what you want and adopt some discipline. Lorenzo moved around
aimlessly for years but he finally decided to go all in on his dreams; and that’s what it took.

“I went to college for 5 semesters, I had fun and I did what I wanted to. But ultimately, I felt I was
wasting time and money. After all; you can’t teach talent, and I was going for Media and Arts”.

After leaving college [upstate NY] Lorenzo didn’t move back to his hometown on Long Island,
instead he moved to Connecticut, followed by a brief return to LI before taking a hiatus in
Pennsylvania for two years. From here Lorenzo realized he needed to do something drastic.
That’s when Lorenzo decided to move to Los Angeles in 2021 and start his career for real.

“I Had been moving around aimlessly looking for a sense of ‘Home’ and I finally decided I would
never be happy until I was somewhere I loved doing what I love to do; and that’s exactly what I
did. I risked it all, and almost lost it all, but I prevailed and it was the best thing I’ve ever done”

Since Moving to Los Angeles Lorenzo has Published a Poetry Book, is on Season 2 of his
Podcast, has done countless shows and created some amazing clothing. We always love a
good story and despite being all alone with nothing, nowhere to go and no one to turn to, he
was able to make it through the fire.

“Yeah you know how it is. I’m basically an idiot. I came here with my ex and she left me
homeless out here on my 25th birthday after I’d truly given my last for her. But it seems like I
really needed that lesson though; my life hasn’t ever been better. That’s the beautiful part.”
For updates, on this story, or if this meant a lot to you: All work and content can be found on his
website https://LorenzoTheGawd.com or on his social media @LorenzoTheGawed