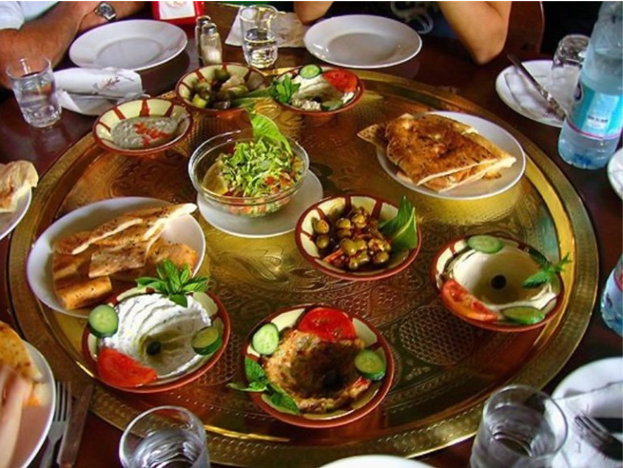 One of the most interesting aspects of the holiday in Albania is the opportunity to get to know the traditional Albanian food, which testifies to the history and culture of this very interesting country, influenced over the centuries especially by the domination of the Ottoman Empire, which lasted over 500 years. One of the many reasons why you should visit Albania, beyond its splendid beaches overlooking the crystal clear sea, and the splendid inland places rich in culture, is its traditional cuisine, truly exquisite.

The Albanian cuisine is the culinary art expression developed in Albania, with influence of Mediterranean cuisine (in particular the Greek and Italian) and those of the other Balkan nations, but above the entire Turkish one. In fact, the Albanian territory has been occupied by the Ottoman Empire for about five centuries, and this has greatly influenced the tradition and the original way of cooking of the people.

If you decide to travel to Albania you can taste its fresh and really tasty dishes always served in very large portion, so much so that generally I can’t finish them either. You can choose to eat in family-run trattorias but also in the folkloric markets in the form of street food. Or even in the numerous trendy restaurants that are popping up like mushrooms especially in the most touristic areas of Tirana , where chefs who have returned to their homeland work after having worked for many years in the kitchens of famous European restaurants, bringing their art back home and giving life to many fusion dishes.

Although for me the markets are certainly the best place to enjoy the flavors of traditional Albanian food, which I introduce you to through its most typical dishes. Traditional Albanian cuisine: a taste of the different specialties

A prominent place in traditional Albanian cuisine is reserved for cereal dishes.

Bread prepared with wheat, corn, or chickpeas, Jufka , similar to noodles prepared strictly by hand, Trahana , a kind of pasta, classic of the city of Vlora, obtained by mixing flour with yogurt, salt, butter, the all grated and left to rest in the sun. But also the Kulaç, simple bread prepared especially at the end of the year to consume it hot with butter and white cheese. Together with the numerous varieties of Byrek (which I will tell you about later) and Lakror, similar to the byrek but of Albanian origin, this is also made of puff pastry with different fillings.

Dishes based on sea and lake fish

As is logical along the Adriatic and Ionian coast, it is a riot of dishes based on fresh fish and seafood cooked in many different ways. In fact, the coast from Velipoja to Saranda is full of fish restaurants, for all tastes and budgets. Here you will find spectacular grilled fish, fries and excellent first courses of fish: from the classic red to seafood to linguine to sea dates, and rare molluscs that you’ve probably never tasted. While in the places that overlook the lakes there are dishes based on sweet fish. The carp terrine in the area of ​​Lake Skadar is exquisite , or the trays of Koran, the famous salmon trout from Lake Ohrid (which Albania shares with Macedonia), unique in the world. Very tasty is also the fish dried in the sun and shaded with red vinegar, hot water and extra virgin olive oil.

Meat is a prominent product in traditional Albanian cuisine: either preserved in the form of tasty Pasterma (salted and smoked meats), or the tasty Llukanik, the typical salami of the peasant tradition, or cooked on the spot, on a spit, in the oven or in sac, the special covered trays placed on a slow fire on the grill.Inland, recipes based on lamb and kid, cooked on a spit or stewed, are widespread. And the succulent veal steaks cooked on the grill, together with the large ribs of pork in the oven.

For example, the Tavëdheu is exquisite, a beef (or liver) stew cooked in a terracotta bowl together with white cheese, tomato, bay leaf and oregano. Or the Tavëkosi, made from lamb stew with yogurt. Albanian meat dishes are served rigorously together with side dishes of organic and seasonal vegetables, cold or grilled on steaming grills, seasoned with extra virgin olive oil.

In traditional Albanian cuisine there are also many desserts. Besides the Bakllava (of which I speak later) and Tullumba, both of Turkish origin, rich in syrups, sugar, honey and dried fruit, you find the Kadaif, the Pastashuta and the Supa.

Delicious is the Flija, a traditional dessert from the northern mountains. In practice, a cake composed of many layers of very thin crepes, which is accompanied with yogurt and walnuts.And then there is the Trilece, a soft sponge cake dipped in milk and cream for desserts, to be served with a generous layer of chocolate or caramel. According to some it is a dessert from Mexico, but the certainty is that in recent years it has literally conquered the belly of Albanians and Italian tourists, to the point of becoming the most requested dessert after Baklava.